“When Sonja Peterson reads the economic news, she's reminded of the explorers of the romantic age, and their frenzied quests to conquer the wild unknown..Peterson's current exhibition…explores this connection between untamed nature and the wilds of Wall Street. In her intensely detailed paper cuts, exotic trees stand next to skyscrapers, while businessmen with briefcases navigate the vines alongside monkeys and cranes. In the shadows of the jungle lie stock reports and Dow Jones averages…While the beauty and intricacy of Peterson's work draws in the viewer's eyes, upon closer inspection it reveals an unsettling relationship between man and nature. “ - Marianne Combs, MPR, May 13, 2010

Sonja Peterson, uses her intricate paper cuts to explore technology and nature. Without providing answers, she quietly provokes the viewer to question the roles and relationships of mankind with the natural world.

On the surface her monochromatic works appear as gentle, serene abstracts or perhaps fantasy landscapes. Her pieces depict detailed nature scenes interblended with glimpses of mankind. Birds, deer, people, plants and buildings can be discerned in her intricate paper cuts. However, on closer examination, the pieces become disturbing and seem to hide an almost violent message. A limp human form is draped over the branch of a tree. Glimpsed beneath the paper cuts are layers of newsprint from the Wall Street Journal.

Peterson’s pieces seemingly ask, what is nature? Can it truly be controlled? What is wild and uncontrolled? Is it nature, or is it actually mankind and technology?

The inspiration for “Second Nature” derives largely from Peterson’s fascination with what author, Richard Holmes, describes as “The Age of Wonder;” the period between the late 18th and early 19th centuries overlapping with the Romantic Age. During this time writers and poets such as Coleridge, Keats, Shelley and Wordsworth were being influenced by explorers and scientists of the age, such as Charles Darwin, Humphry Davy, William Herschel, and Mungo Park.

“During the Age of Wonder the westernized world was creating the idea of nature as a separate construct, as something that had seemed endless, and untamed that could be owned and controlled by man,” explains Peterson. “Scientists of that age were eager to discover and exploit nature by unlocking its secrets, yet there was a sense of wonder and fear about where these discoveries were taking us as a society.”

“There’s a lot of shadow play in my pieces,” states Peterson, pointing to her use of aluminum leaf, glass and three-dimensional collage. “I want people to question what is and what isn’t real.”

In “The World Is Too Much With Us” office towers loom large under a lush jungle. But is the jungle overtaking the towers or are the towers trampling the jungle? Is it a nod to the power of Wall Street or the demise of derivatives?

Peterson’s not prepared to answer those questions. “I prefer to do more questioning,” replies Peterson. “I like to find uncomfortable similarities that one might consider morally different.” 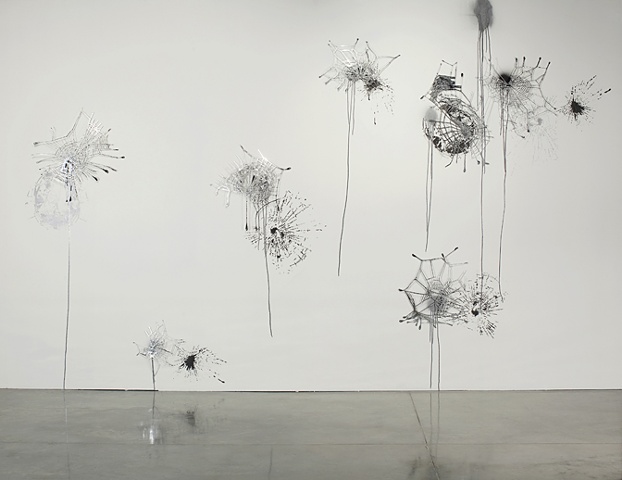 The Day That Cracked
plexi and acrylic paint
10’ x 13’ 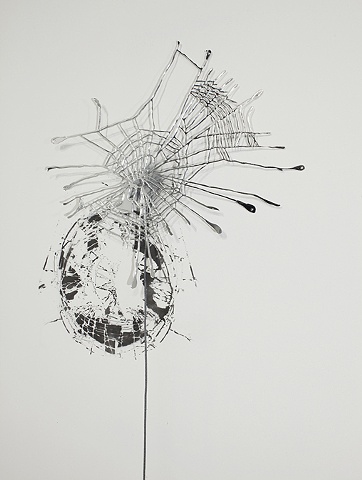 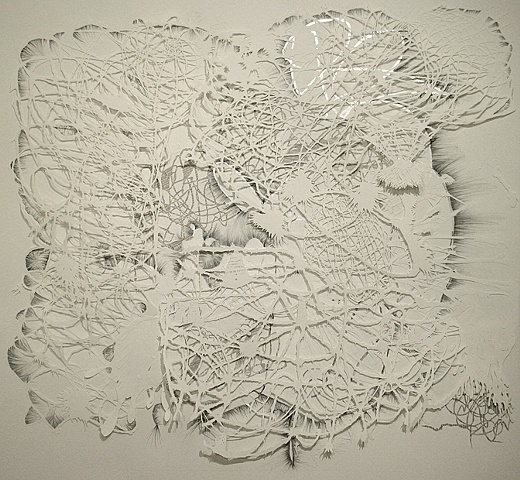 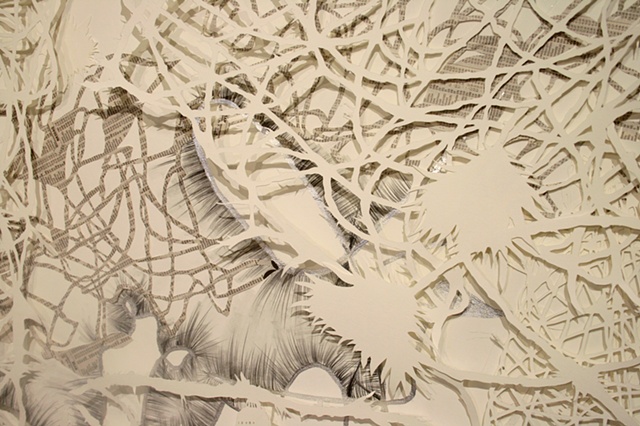 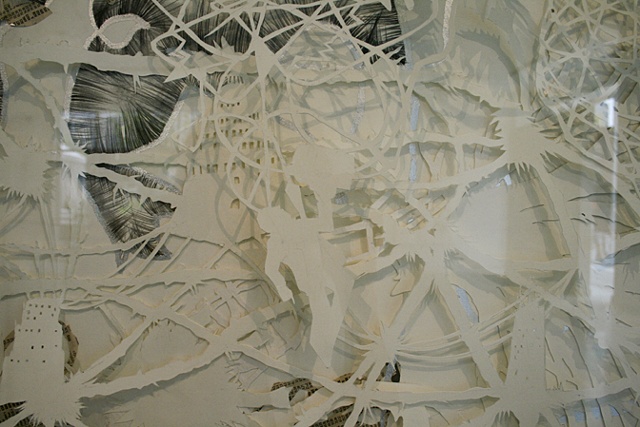 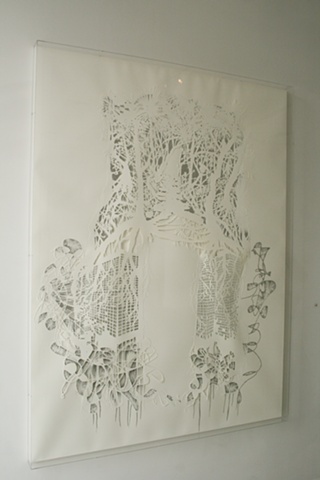 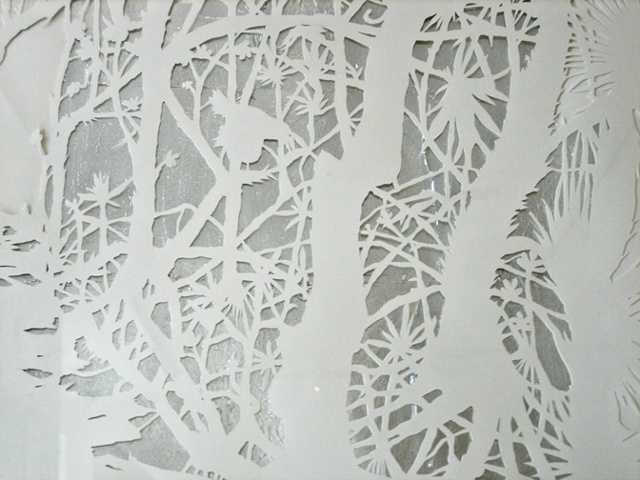 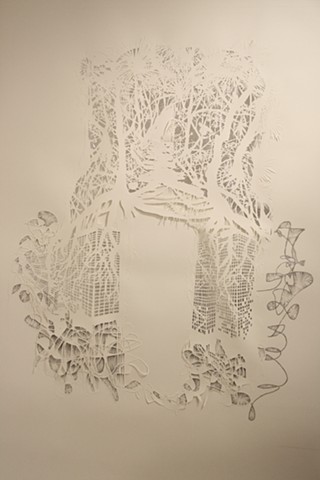 The World Is Too Much For Us 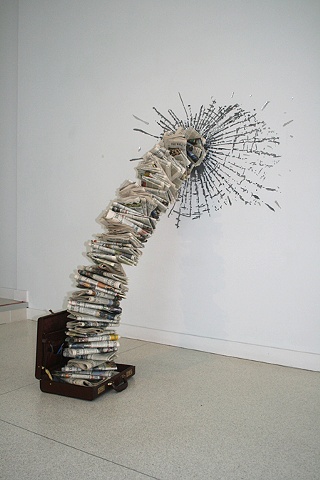 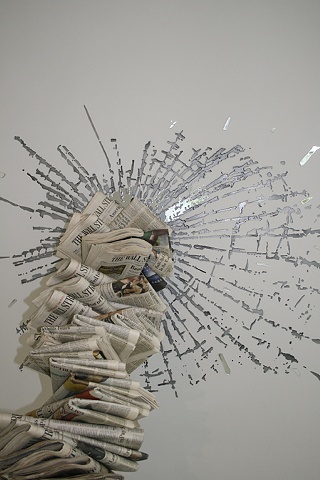 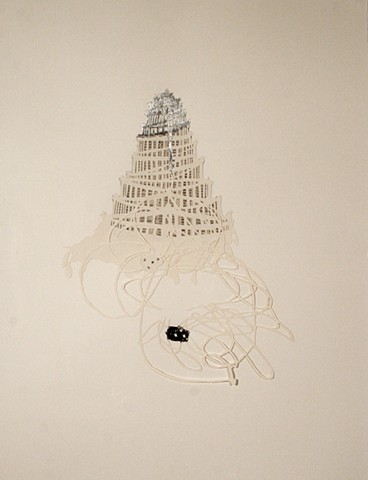 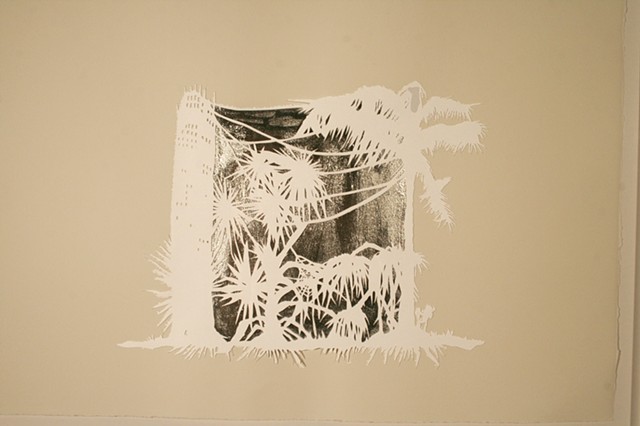 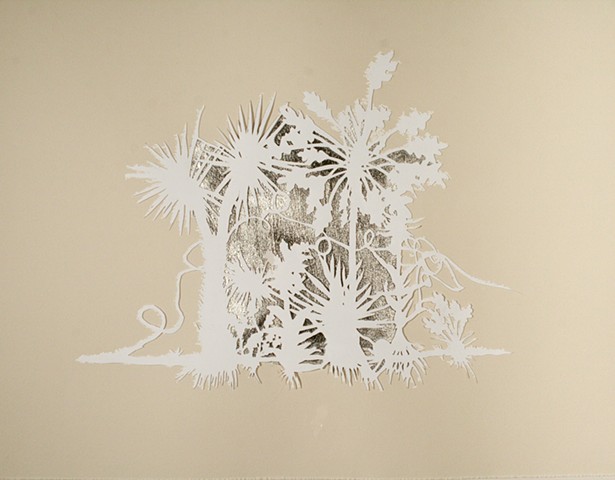 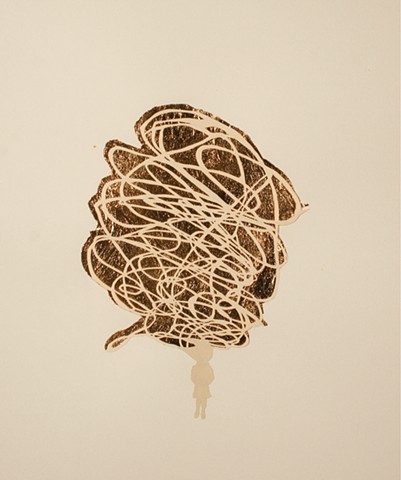 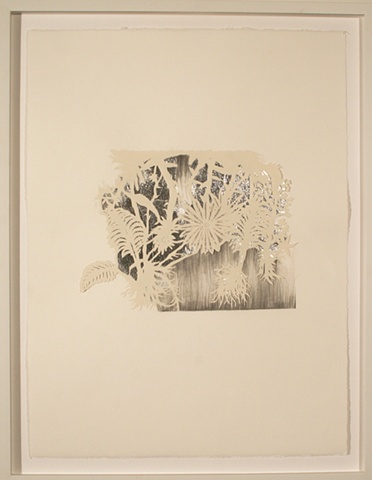 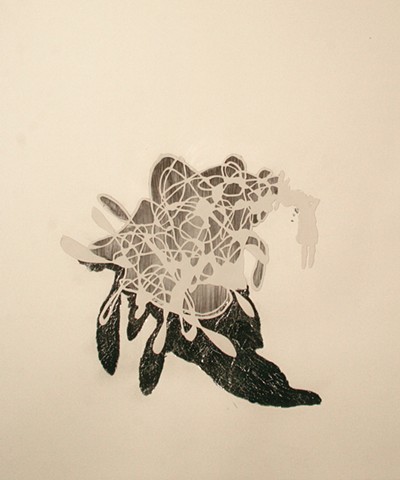 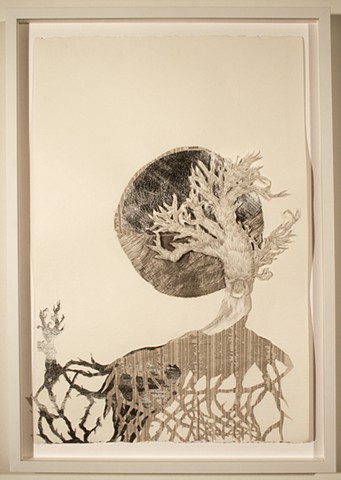